Look what just got tweeted:

It appears that someone out there does not know better than to tweet it to the likes of me. (Did you hear that irony-infused cackling? Who says feminists have no sense of humor?) I clicked. Said doll did not appear on the screen, so I searched the Walmart site and found: Want to know what's so special about Baby Alive? Just what are the Real Surprises the doll brings? I thought you would never ask: 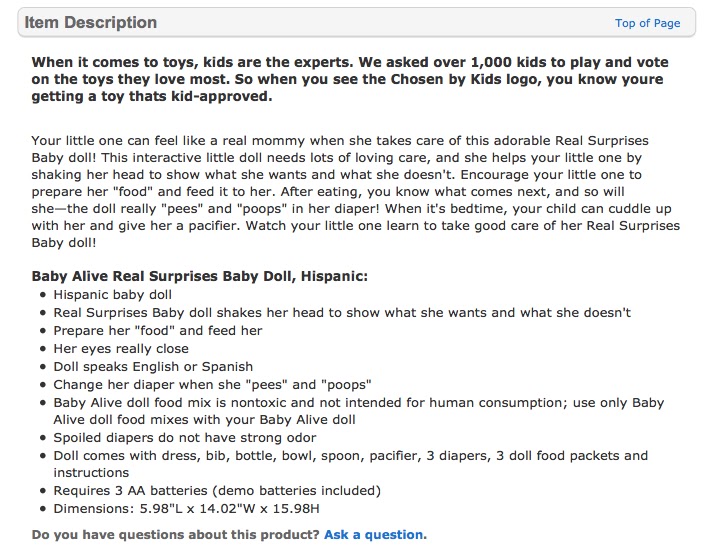 There's nothing new about dolls that talk, walk, crawl, or "pee" and "poop." (The Dy Dee Doll, introduced in 1937, was one of the first to introduce children to the joys of diapering from the other end of the business.) However, Walmart is tweeting me at just the moment that I'm re-reading Miriam Formanek-Brunell's Made to Play House: Dolls and the Commercialization of American Girlhood, 1830-1930. The book is not so much about dolls, but about the industry of dolls in the U.S. It traces a history in which female and male dollmakers brought different ideas not only about the production of dolls - which could be generalized as craft versus industry of dollmaking - but also the material qualities of the dolls themselves what needs or wants of children that the dolls met.

This is the Talking Doll that Thomas Edison created: 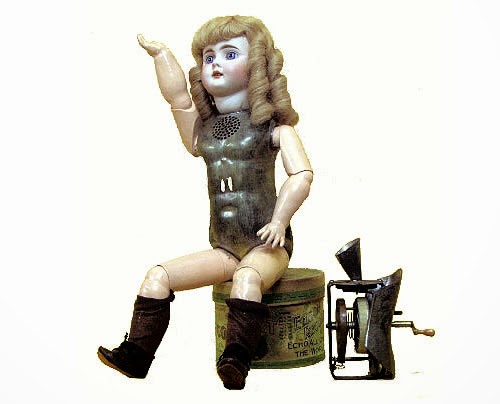 Note that the doll has joints, so the limbs can bend and move, and a voice box, "just like a human," but the parts are hard and cold, especially the metal torso. (Of course, the doll would have been clothed when presented to a child.) It is a mechanical product of a mechanized process. Formanek-Brunell describes male inventors as interested in dolls as entertaining and amusing play things.

In contrast, female inventors "cited the needs of children as the basis for their inventions. In their patents, women claimed that children needed safe, portable, and durable dolls to teach them about relationships" (4). They were interested in creating dolls that were intended to be touched and handled, with soft skin, also "just like a human." They also felt that the dolls were a vehicle for the instruction of children. Reform-minded women of the Progressive Era particularly had their eyes on working class and immigrant girls whom they felt ought to be trained how to care and nurture "properly."

Hmm. So, if you thought my blog post was going to lead you into a hate-down on the Baby Alive doll as reinforcing gender stereotypes, you might be clicking away from it disappointed. (Maybe next time...) However, I think looking into dolls and their making and meaning leads us to consider even more interesting, important, and necessary questions about the lives, work, and play of women, men, girls, and boys.

So, what's the take-home lesson for today?
1. Don't ignore twitter. (Including tweets from Walmart!)
2. Things are interesting to think about. (That's a shout out to my friends in material culture studies...)
3. A critique of the present needs to incorporate a look at the past. (See also, "sexuality, one generation's celebration of equals exploitation, another generation's understanding of.")


Posted by parenthropologist at 1:19 PM 4 comments:

How fetuses sell us stuff

Fetal images have figured in advertisements for Volvo, about which anthropologist Janelle Taylor has written, and for Honda, among other consumer products. Sociologist Daniel Thomas Cook has written about the interesting connections between the late 20th century conceptualization of children as consumers and fetuses as persons. (Here is a link, but unfortunately there is a paywall.)

Walking up Columbus Avenue today with my sister, not far from the American Museum of Natural History, in a neighborhood that is trafficked heavily with double-wide strollers and toddlers on scooters, we saw the following advertisement for the new Blackberry on a bus shelter: 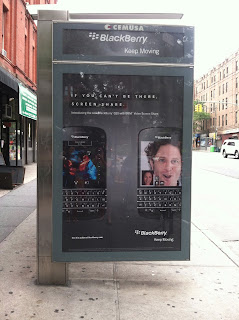 What is the story here? Is the woman sending the image to her partner on her BlackBerry? Is he viewing it on his Blackberry? Are she and he sharing a moment, like OMG, twins!? 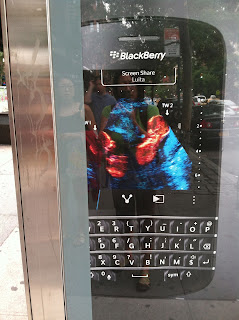 Are we to marvel here at the technology of the sonogram and /or the BlackBerry? 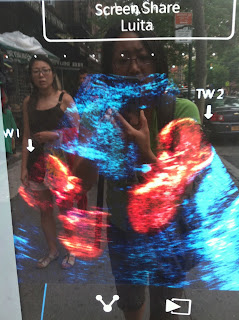 Um, yes, you can see my sister and me reflected in this photo.
Posted by parenthropologist at 8:29 PM 3 comments:

On Saturday, the four of us, plus my mother, went to a Japanese supermarket / food court. What interested me even more than the food is the display of sampuru or plastic food replicas. If you know more than what Wikipedia can tell us, please be in touch... 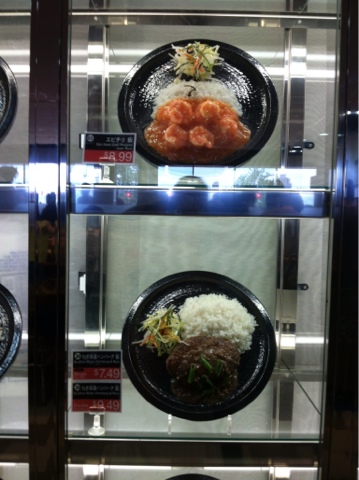 The real food is presented to replicate the look of the replicas displayed here. 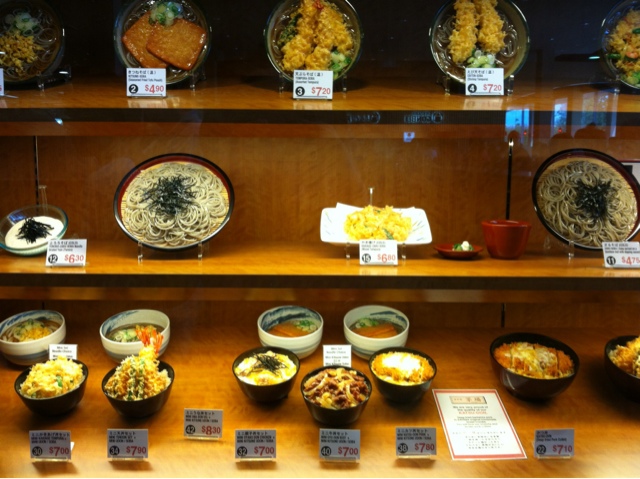 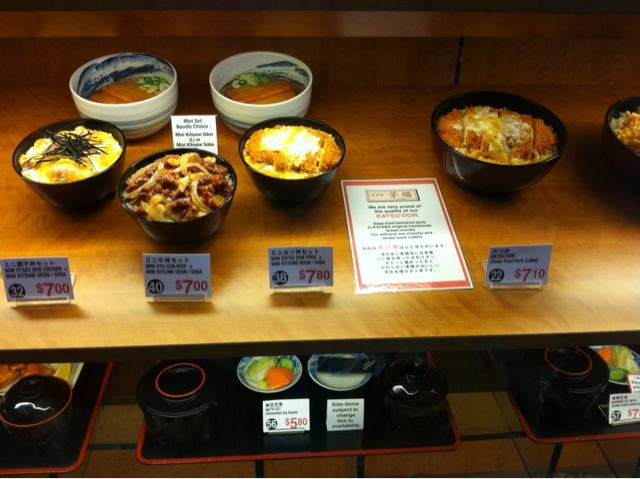 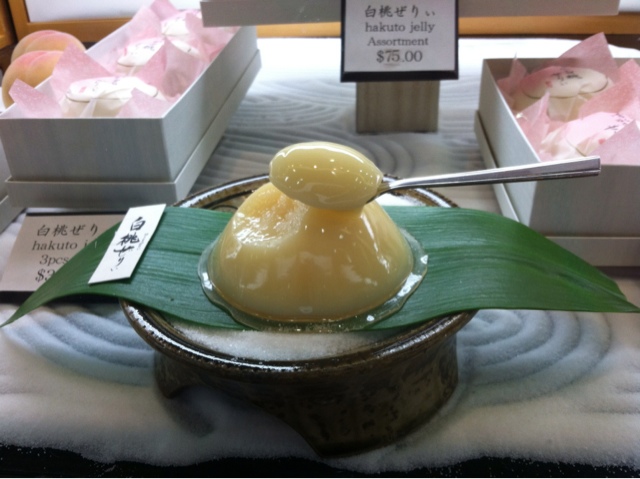 I especially admired the replica ice! 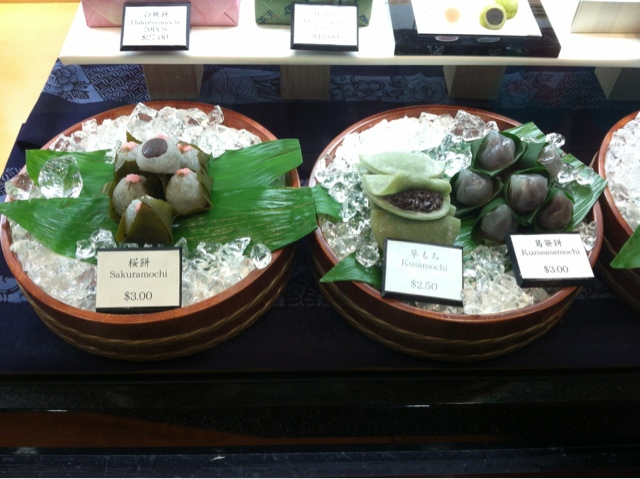 Update: I found a YouTube channel called Fake Food Japan, which includes videos that I not yet viewed, about the process of making sampuru.

Posted by parenthropologist at 11:03 PM 3 comments: 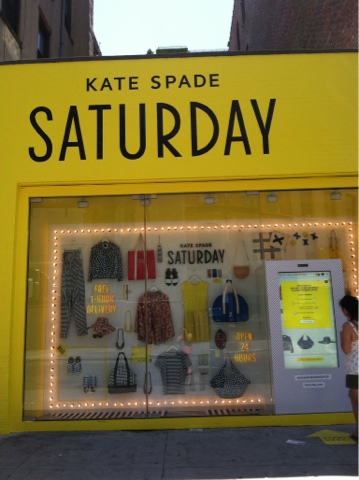 Window shopping! Literally. Kate Spade Saturday is (or was - I just read it was scheduled to be open for a month only, until July 7) a pop-up storefront on Gansevoort Street, with three locations in NYC. 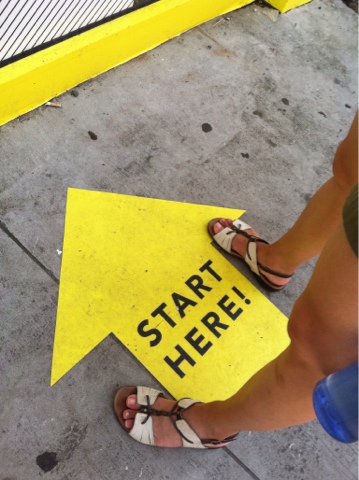 When you swipe the large touchscreen, the lights around the shop window flash like you hit the jackpot. 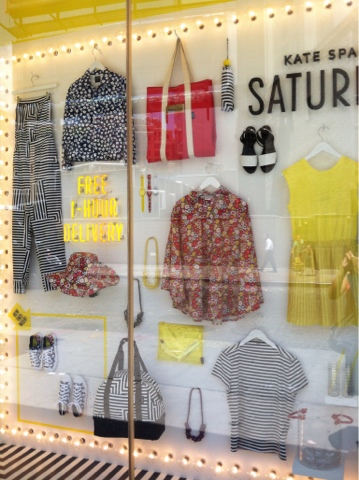 Then you are instructed on what to do: 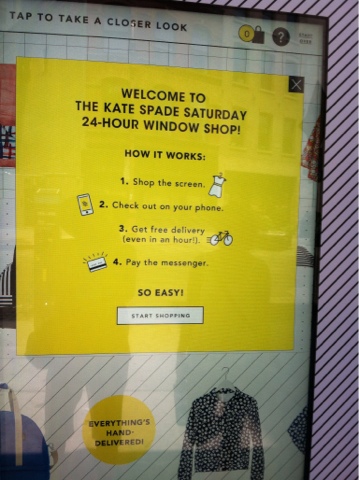 I like that you are promised one hour delivery. Could they bring dinner with that purse? 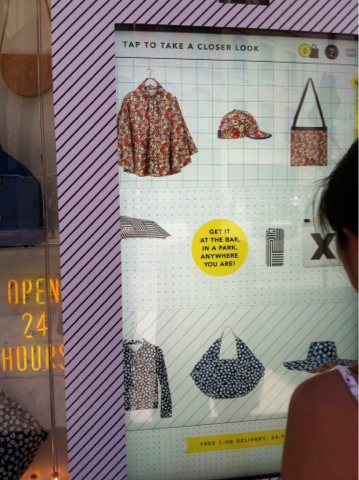 Is it retail, is it advertisement, is it installation, is it performance, is it a self- reflective engagement of all of the above.
Posted by parenthropologist at 5:06 PM No comments:

Living at home while I interned, then worked a bona fide job in NYC, I became a Jersey commuter, moving through the 42nd Street Port Authority Bus Terminal briskly and avoiding contact of any kind with other persons and with other things that might bear traces of contact with other persons, unfortunately including urine. On occasion, I had the even worse misfortune (I thought then) of having to pass through the grim and grimy GWB Bus Terminal. Today, however, I realized what a masterpiece in fact this place is. Here are a few images from my iPhone, taken early this afternoon on platform 22, waiting for bus 186: 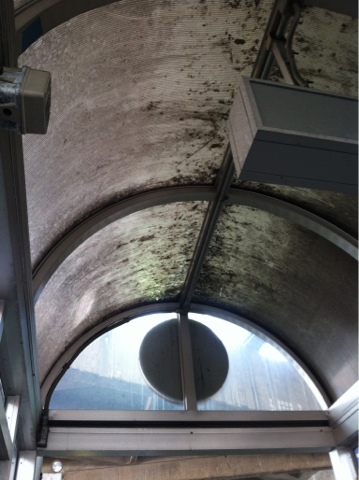 Overhead, in the seated waiting area 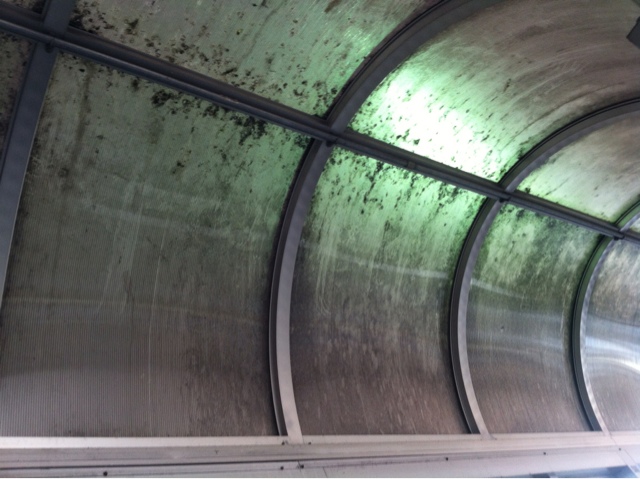 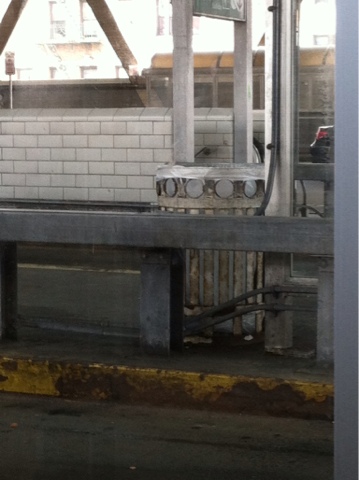 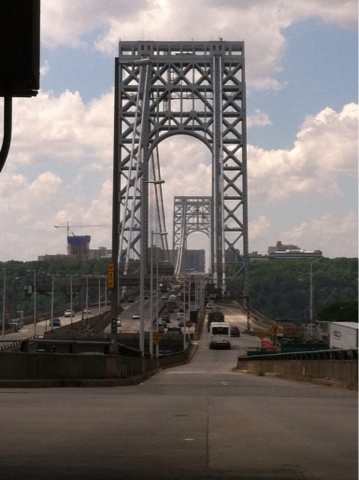 View of the GWB from the end of platform 22 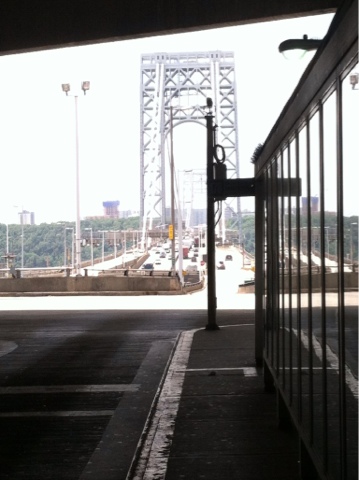 View from the other end of the platform 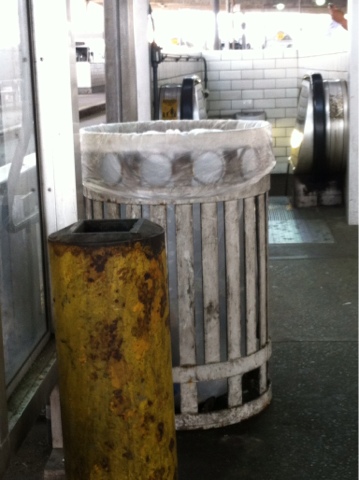 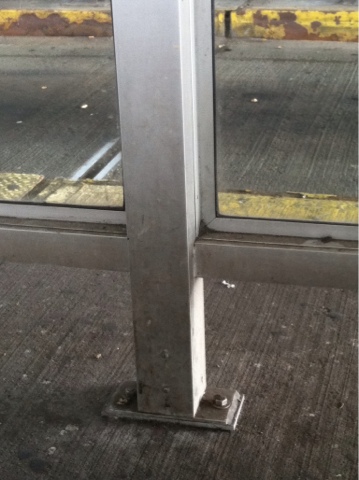 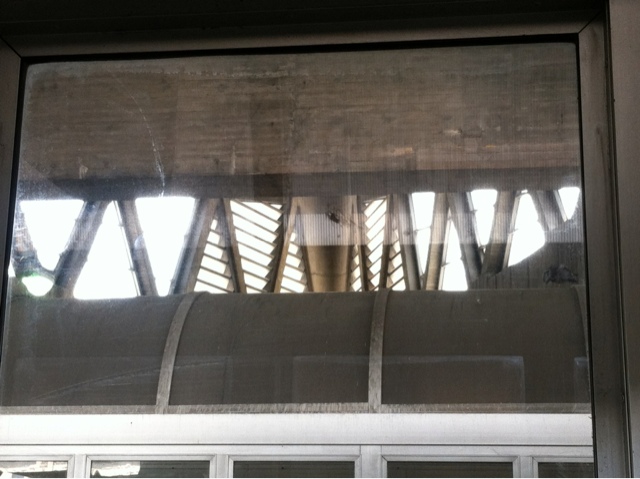 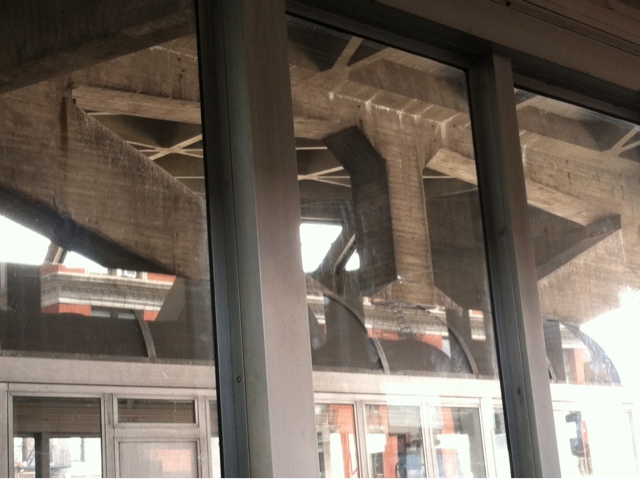 When I arrived at my parents', I immediately googled GWB Bus Station. Those who know more about architecture or NYC history will know already that the designer is Pier Luigi Nervi, who also designed the 1960 Rome Olympic stadium, with which the bus station clearly shares a strong family resemblance: https://www.google.com/search?q=nervi+rome+stadium&client=safari&hl=en&tbm=isch&tbo=u&source=univ&sa=X&ei=J13XUaKzGuvD4AOJj4GQBQ&ved=0CDQQsAQ&biw=768&bih=900
A little more background on the building is here: http://www.panynj.gov/bus-terminals/gwbbs-history.html
There are plans to undertake a multimillion dollar renovation of the station, which I imagine will mean developing the neighborhood into another income bracket.
Posted by parenthropologist at 8:09 PM 2 comments:

Just woke (alone in a quiet cool NYC apartment. Not a Cheerio on the floor!) and decided to post a few thoughts after reading late last night:

Thinking about children, childhood, parents (mothers, fathers, other care givers) in terms of material culture and in particular in museum collections. What can we find?

Visiting the Yale University Furniture Study the other day, our workshop leader noted that the painting on early 19th century fancy chairs not uncommonly involved the work of women and children. (In the case of a particular chair manufacturer, it also involved the work of convicts. Rather enterprising, I thought.)

So, the painting on chairs, which might be displayed as an example of decorative arts, domestic interiors, New England history, or early American industry, is an artifact also of children's lives. Sharon Brookshaw, in her 2009 article, "The Material Culture of Children and Childhood," notes that the UK's National Trust Museum of Childhood had displayed work implements and products from industries like lace-making in which children significantly participated.

Contemporary expectations about children and childhood can prevent us from seeing their material traces, especially from the past.

Historian Philippe Aries famously asserted in Centuries of Childhood (1962) that although children existed, childhood had not in the Middle Ages. Following Aries, scholars now distinguish between "children" and "childhood," but both terms are understood to refer to individuals / groups (children) and experiences (childhood) that are largely cultural and social. The idea that children are (physically and / or psychologically) immature is itself culturally and socially defined. Brookshaw (2009) notes that the word infant derives from the Latin in-fans or "not speaking."

"Children" and "childhood" become used to reference different sets of perspectives - one centered on those defined as children, and the other on adults who importantly and meaningfully interact with children and impose on them ideas and practices about what children are and ought to be.

"Children represent an interesting case in terms of material culture as, although much of the material world they interact with is made deliberately, purposefully and is reflective of the culture from which it originates, the objects we most commonly associate with this group were not made or controlled directly by its members, but rather are imposed on it by another group: adults" (Brookshaw 2009: 367)

One example: Toys (and Brookshaw discusses the problems with their collection in museums).

Another example (which especially interests me): "the material culture of parenthood: items that parents feel obliged to buy for their children that the child may not necessarily want or even need" (Brookshaw 2009: 368).

The material culture of parenting

The parenthropologist is kicking off her sabbatical with a 4-week seminar on 19th century American material culture sponsored by the National Endowment for the Humanities and held at Bard Graduate Center.

Being accustomed to working with people, I feel a bit adrift working with objects. Frustratingly, they cannot talk to me.

The question that I bring to the seminar is this:

Parenting in twenty-first century America is understood to be an enterprise that requires the acquisition of new clothes, accessories, furnishings, gadgets, devices, and all manner of stuff and gear for parents and children alike. How have we come to accumulate so much for the purpose of childrearing? What things did the raising of children require in the past?

Posted by parenthropologist at 9:36 PM 2 comments:

Pregnancy in Practice: Expectation and Experience in the Contemporary US brings into focus a topic that has been overlooked in the scholarship on reproduction - the everyday experiences that mark pregnancy in the US today. For professionals and expectant parents alike. From Berghahn Books. 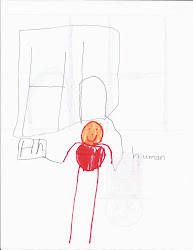 Anthropologically infused musings on why 2 jobs + 2 kids = 2 much... With screeds on academia / higher education, gender, politics, economics, and history. Not to mention occasional yuks.